Molly Watts and Finley Sinks have a special touch with patients at North Central Baptist Hospital (NCBH). When they visit patients, they always manage to evoke a smile, even from the sickest patients. Molly and Finley aren’t your typical hospital volunteers. They’re certified therapy dogs – furry friends who help patients of all ages feel as comfortable as possible during their hospital stay. Molly is a 6-year-old English Golden Retriever. Finley is a 9-year-old Wire Fox Terrier.

Finley Sinks and his owner, Debbie Sink, make a new friend in the Pediatric Unit at North Central Baptist Hospital.

“Being in the hospital can be intimidating and stressful for patients and their families,” said Lisa Kyrisch, volunteer manager at NCBH. “That’s why Molly and Finley are so important to the hospitality, care and healing of our patients,” she said. “We consider them part of our health care team and they take their jobs very seriously.” Both Molly and Finley, along with nine other therapy dogs, visit patients of all ages three times a week as part of the Animal Assisted Therapy Program at NCBH. They each don their own official hospital name tag with their picture on it

April 30 marks National Therapy Animal Day, a time to recognize the hard work and time that therapy animals and their owners dedicate to bringing comfort and healing to those in need. Research recently published in The Journal of Critical Care indicated that therapy animals proved successful in reducing suffering and helping patients take an active role in their recovery. 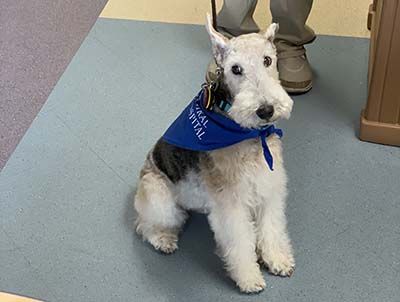 Finley has been a therapy dog at NCBH for seven years. In 2015 during July, Finley was startled by fireworks exploding near his home. As he ran across the street in fright, he was struck by a car. He almost didn’t make it. But after several vet visits and a cast on his leg, he slowly began to recover. To cheer him up, his owner, Debbie Sinks, brought him by in a stroller to see the NCBH nurses and patients. “That really cheered him up,” Debbie said. “He began to recover much faster after all the love they showed him. And now he’s back to giving back as much as they all gave him during his time of need,” she said. “We love working in this hospital with so much care and compassion for everyone,” Debbie said.

Prior to serving as a therapy dog for NCBH, Molly worked at Floresville Elementary School where she helped children affected by the 2017 tragedy at the First Baptist Church in Sutherland Springs in which 27 people were killed. “She made the kids so happy,” Watts said. “Now she continues her calling here at the hospital,” she said.