(San Antonio, TX, March 23, 2018) – A gut hormone-altering laparoscopic procedure performed by a local doctor is making it possible for San Antonians to lose weight and even eliminate diabetes before they reach their weight-loss goals.

Chiara McCool is a proud military daughter, wife and mom. But high blood pressure, high cholesterol, pre-diabetes, sleep apnea and daily body aches were holding her back from living the life she dreamed of with her energetic family. At 42, she weighed 260 pounds and was considered obese like more than 70 percent of San Antonio’s population. In 2016, she underwent a surgical procedure called the Sleeve Gastrectomy that allowed McCool to drop 115 pounds in time to fit into a new dress for her son’s wedding. Now she says she’s ready for the beach and a bikini this summer.

“I lost two to three pounds per day after my surgery,” McCool said. The five-hour Laparoscopic Sleeve Gastrectomy was performed by David Thomas, M.D., bariatric surgeon at Baptist Health System. He removed 80 percent of her stomach and left the remaining in the form of a slender tube that resembles a banana. The new stomach holds a smaller volume of food, which restricts the patient from overeating. “This minimally-invasive procedure requires less time in the operating room and recovery,” Dr. Thomas said. “There is no rerouting of the intestines or bands placed on the intestines.”

After a short two-day stay in the hospital, McCool said she was ready to start her new life. One of the most remarkable things about the procedure Dr. Thomas said is how it changes the way the stomach’s hormones behave. “After the procedure, the stomach naturally begins to alter the way it processes blood sugar and how it responds to sensations of hunger and the feeling of fullness. These changes are effective in helping patients who have type 2 diabetes to eliminate the disease even before they reach their weight-loss goals,” he said. 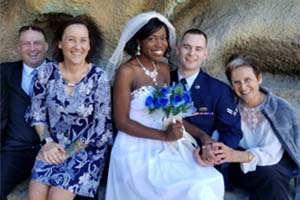 Prior to her surgery, McCool took 18 medications for her multiple weight-related ailments. “I was depressed and desperate, but Dr. Thomas saved my life,” McCool said. “Now I’m off my medications, my blood sugar and cholesterol levels are perfect, I’ve got more energy, more confidence and I’m healthier than I was in my 20s. I can’t stop smiling” she said.