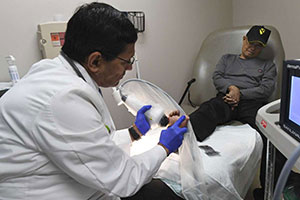 Juan Baez has been managing his Type 1 diabetes for years, but lately it has been more difficult.

Around Christmas, doctors amputated half of the 51-year-old’s left foot, three years after he lost two toes off the other foot. That surgery was followed by a stroke in January. Baez’s wounds take a long time to heal and can turn black from one day to the next.

As Baez has struggled to recover from those setbacks, he became the first patient at Northeast Baptist Hospital’s wound care center to undergo a new treatment designed to facilitate the healing of diabetic foot ulcers.

The system, called dermaPACE, sends acoustic pressure shockwaves using a wand and a gel in and around the damaged tissue. The pulses of energy help stimulate a cellular response that aids the healing process.

Unlike other therapies for non-healing diabetic wounds like hyperbaric oxygen therapy, which can require frequent doctor visits for hours at a time, the shockwave treatment takes a matter of minutes, once a week.

For Baez, the treatment is loud due to the rapid pulsating, but it causes a sensation akin to a “foot massage,” he said. After four sessions, each lasting less than five minutes, the large hole in his foot is almost healed.

“I lost half a foot. Believe me, I don’t want to lose anymore,” Baez said. “It’s working.”

Dr. Jayesh Shah, medical director of the Wound Healing Center at Northeast Baptist, said shockwave therapy has been used to treat gallstones, but research has found it can also be effective for bone and soft tissue healing.

“It kind of expresses your cells to increase the growth factors ... to help with wound healing,” Shah said.

The treatment is particularly relevant in South Texas, where there is “almost an epidemic of diabetes” and amputations related to the disease, he said. Shah, who sees many diabetics at the clinic, views it as one more resource to combat one of the major complications of the disease, he said.

The shockwave system was introduced at Northeast Baptist a little more than a month ago, so only a handful of patients have undergone the treatment so far. Reception among patients has been positive, he said.

“Patients find it pretty easy to do it,” Shah said. “It becomes part of their wound care when they come in.”

Jerry Fernandez, 64, received his first shockwave treatment at Northeast Baptist in late April for wounds related to his Type 2 diabetes, which he has managed for four decades.

Fernandez, who recently had two toes amputated, said he prefers its expediency to the month of daily, two-hour sessions of hyperbaric treatment he previously underwent.

“It’s faster. It’s like three to five minutes and it’s done,” he said. “And it’s weekly. I don’t have to come here every morning.”