Skip to main content and our Accessibility Statement may be found in the footer of our website.
Back To News
{{CTAButtonText}} 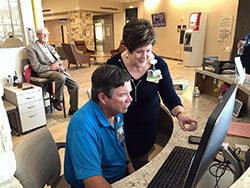 Going to the hospital typically isn’t something people get joy out of, but for Resolute Health Hospital volunteers, it is.

Resolute Health Hospital recognizes April as Volunteer Appreciation Month, and five years into the hospital’s services, staff feels they have a lot to celebrate with over 100 volunteers helping everything to run smoothly.

The hospital has spent the month showering their volunteers with thanks, including giving them a celebratory dinner at Dos Rios last week and giving out gift cards and awards to some of the exemplary helpers, said Pamela Dietz, Resolute Health Hospital pastoral care and volunteer coordinator.

“We opened in June of 2014 with just four volunteers,” Dietz said. “Two of those volunteers actually remain. We’ve grown a lot since then, and now have about 100 volunteers.”

One of these remaining original volunteers is Sue Youngs, a Canyon Lake resident who volunteers several times a week.

“I was widowed in 2014 and decided I wanted to do volunteer work at the hospital,” Youngs said. “So I was looking for a chance to volunteer and my daughter who works with this hospital said, ‘Wait and volunteer at Resolute when it opens,’ so I’m one of the original four here.”

Youngs is often early to her shifts, Dietz said. As the head trainer for new volunteers, Youngs has really helped grow the volunteer base at Resolute, Dietz said.

“Our first four volunteers were our culture, they had the DNA of what we wanted to see in volunteers here,” Dietz said. “It was a sort of natural in-house growth from there, as people invited in their friends and then they brought their friends, so on and so forth.”

Youngs has over 4,200 volunteer hours and is striving to get to 5,000 before reaching her official fifth anniversary with Resolute in June.

“This place fuels me, it puts gas in my tank,” Youngs said with a smile. When asked what her favorite part of volunteering is, Youngs responded, “What isn’t my favorite part?”

The volunteers at the hospital are all very different, but have one goal in mind — service, Dietz said.

“Our volunteers come from all walks of life; we have retired superintendents, pastors, teachers, college students — they range from 22 to 90 years old, we have it all,” Dietz said.

Their roles in the hospital range from working the front desk and showing people around, to pastoral services or even more select types of work, Deitz said.

This year’s winner for the annual Volunteer of the Year Award, which is also given out in April, was 90-year-old Rev. Bill Wehmeyer, Dietz said.

“I’m a volunteer chaplain,” Wehmeyer said. “I was a pastor and I volunteered for the Baptist system in San Antonio for a number of years but when Resolute opened up I asked to transfer over to volunteer here.”

Wehmeyer, a Canyon Lake resident as well, said he was very touched to be named the volunteer of the year.

“My favorite part is seeing patients perk up as I visit with them,” Wehmeyer said. “I come in and get supplied a list of patients who said they’d like to be visited by a pastor and get to visit with them.”

Volunteers don’t just work with patients, but also help with the hospitals upkeep. Another award recipient this year was volunteer Ryla Cottingham, who received a special services award for maintaining the hospitals atrium gardens.

“As the master gardener, I took the atrium in as my project,” Cottingham said. “It needed someone to look after it and tend to it regularly and I love gardening, so I took it on as a project and it’s really just come to life.”

Cottingham said she tries to write different messages to the patients everyday in the sandy zen garden for them to look down at.

“I love plants, and I love people and this is a way to really combine those,” she said. “Plants are very healing, so I came here looking for a way to help, and plants are that way too.”

For some, volunteering at the hospital is also a way to remain active in a setting their familiar with. Volunteer Lenore Newton was a registered nurse for over 30 years before retiring. She now serves as a trainer for volunteers in wheel chair use, and helps out in procedural services.

“My favorite part is just being in a hospital again, I just like being in the hospital helping out,” Newton said.

For others, such as for nursing student Aleesia Tafoya, it’s a way to get a taste of the busy hospital world .

“It’s fun to volunteer here, I love the environment, and it’s good practice for nursing, we get to be made familiar with everything here,” the Texas State University sophomore said.

The time commitment isn’t too bad either, Tafoya said. Dietz said volunteers are required to make a “1-1-1” commitment — to work one shift, once a week, for a year. Shifts are separated into three hour intervals, but many people sign up for double shifts she said.

Although April is officially the month to recognize their volunteers, Mark Barnhardt, CEO of Resolute Health Hospital, said he hopes staff knows throughout the whole year how much the volunteers are appreciated.

“They are what makes this hospital so special,” Barnhardt said. “They’re the front door, the face of this hospital. They set the tone of the culture here.”