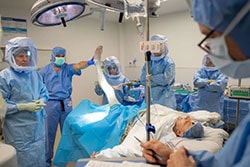 More than 340 miles from home, Lon Munsey was wheeled into an operating room at Northeast Baptist Hospital for a total knee replacement.

He was nervous, but at least five of his co-workers at a Walmart in North Texas had gone to the same hospital, with good results.

“They came back singing high praises,” Munsey said. “It’s a great deal for the people that know about it.”

Walmart and other major U.S. corporations are sending workers to hospitals around the country that they’ve deemed “Centers of Excellence” for various surgical procedures. It’s a way to improve quality of care for their employees and to cut health care costs.

Walmart covers 100 percent of the cost of care, travel, lodging and meals for the patient and a caregiver.

In recent years, the mega-retailer has contracted directly with top-performing hospitals to negotiate the best deal, often at half the going price, on several common procedures.

Northeast Baptist, owned by Dallas-based Tenet Healthcare, was designated a Center of Excellence under the travel program 13 months ago. Northeast is part of a network of hospitals that include Johns Hopkins, Scripps Mercy and the Mayo Clinic.

Walmart and other major companies such as McKesson and Lowe’s have sent more than 250 workers to Northeast for joint replacement and weight-reduction surgeries.

Out-of-state patients usually arrive at San Antonio International Airport on a Monday and are picked up by a hired sedan. They meets their surgeons Tuesday, go into surgery Wednesday and recover for a week at a local hotel before flying home.

As the largest employer in the U.S., Walmart is spending billions of dollars on health care each year for its employees and their families. Because health insurance expenses can be unpredictable, Walmart and other large employers are essentially taking insurers out of the equation by self-insuring their workers.

More than 5,000 Walmart health plan members have participated in the travel care program, according to the retailer. The company is looking to avoid unnecessary surgeries and reduce post-procedure complications.

Lisa Woods, a senior director of health benefits at Walmart, designed the program with Pacific Business Group on Health and Health Designs Plus.

They estimate that Walmart, Lowe’s and McKesson saved an estimated $19.4 million combined through the spine and joint surgery programs in 2017.

“The benefit to patients is significant, including receiving the highest quality of care possible,” Woods said.

Among the employees who had joint replacement surgery at Center of Excellence sites, they had shorter hospital stays and lower readmission rates, and they returned to work sooner.

Dr. David Fox, a San Antonio orthopedic surgeon who performs around 600 knee and hip surgeries a year, said Northeast Baptist was picked for its quality.

“It’s a pretty well-orchestrated program,” Fox said. “The rules and the structure are good for outcomes.”

Often, workers can get back to their jobs after eight weeks of recovery, he said.

Under the travel program, surgeons are required to stay in contact once their patients return home so they can track their recovery. Patients living in rural areas don’t always have access to specialists, and Fox said he’s used FaceTime with a patient’s primary care doctor to ensure the patient is on the mend.

Many of the patients he’s seen through the program have been in bad shape. By the time many of these patients see providers in the travel program, their condition has gotten to the point that they can’t put off treatment any longer.

“These patients are hard workers. They’re grateful and they’re honest,” he said, adding that many ask when they can return to work.

Fox is Lon Munsey’s surgeon. Munsey, 64, has worked on his feet all his life: as an auto mechanic for 20 years, then as a Walmart associate for 19 years in the electronics and wireless department.

He’s already been cleared for surgery on his other knee — after his knee replacement last week and before returning to work at a Walmart store outside Burkburnett, near the Oklahoma state line.

Lon’s wife, Carrie Munsey, who sat by his side, went through her own total knee replacement in December. She will likely have to pay 20 percent of the $64,000-plus bill for the surgery, or at least $12,8000.

She’s glad her husband’s bill is covered at least.

“This is the new wave of health care,” said Nanette Costanza, 64, another one of Fox’s out-of-state patients. “They roll out the red carpet. They really do.”

Before Costanza was a greeter at a Sam’s Club in Covington, La., for seven years, she was a professional ballet dancer for four decades and then a fitness instructor. A car accident led to rapid degeneration of her hips. She used a cane for four years.

“Mobility is a big part of my life, and I couldn’t stand long enough to brush my teeth,” she said.

She needed two complete hip replacements but wouldn’t have been able to afford the surgery at a nearby hospital, so she looked into her company’s Centers of Excellence program.

“It was an extraordinary experience,” she said. “It’s given me my life back.”